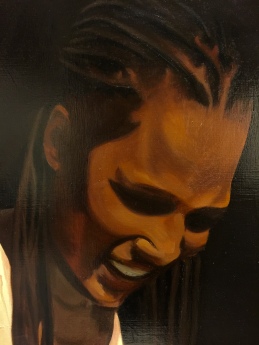 Several years ago, when I found myself unemployed, I decided to pick up my paintbrushes and start painting again after about 20 years, and my friend Dennie proved a worthy subject.  Getting back into the groove was frustrating, finding that I had to grease some gears that hadn’t been turned in so long.  It’s a fairly crude painting, brushstrokes thrown on without any precision, and lacking the details that separate her as an individual. But I plodded on, knowing that it was just practice to get myself back into the waters and… whatever.

I was exhibiting my work during Somerville Open Studios a few years ago, and because most of my work is commissioned and hanging in other people’s homes, I pulled out pretty much everything I had to display.  I love Open Studios weekend because it’s an opportunity to talk with lots of diverse visitors, see their reactions, and hear their feedback.

In the afternoon, a guy came through with his young daughter, perusing the paintings and pointing at the dogs.  Finally, he pointed to Dennie and said to me “I think I know her.”  With a raised eyebrow, I thought Mmm hmm.  White guy comes through and sees a woman of color with dreadlocks, and he knows her.
“Really?” I asked.
“Yeah.  God, what was her name…  I worked on the Governor’s Council with her…”

Wait.  Dennie was appointed by Gov. Patrick to sit on one of his councils. Can this guy really recognize her from that painting??
“Dennie,” I replied
“Dennie!  Yes!” and he continued talking about her.  I laughed, saying that the painting wasn’t that detailed and how impressed I was that he could see her in it.  He responded that she has a certain essence which was captured.

It’s ironic that, to this day, one of the greatest compliments I’ve received on my work was on a painting that is most certainly not my best.  My thanks to that stranger.  Interactions and comments such as this linger forever in an artist’s mind, and remind us that we are merely the conduit for a rendering far more complex than our limited human brains can comprehend.

20 Nov This entry was published on November 20, 2016 at 1:30 pm and is filed under oil on canvas, portrait. Bookmark the permalink. Follow any comments here with the RSS feed for this post.