He’s in a Good Place 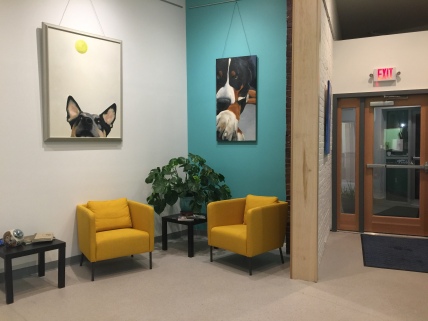 After having my work hung at Christopher’s in Cambridge, I was contacted by a local veterinary clinic interested in exhibiting my dog paintings on a rotating basis.  They were fairly new to their address and the walls were bare.  I met with them and we hit it off; nice people with a vision compatible with mine, and we moved forward. 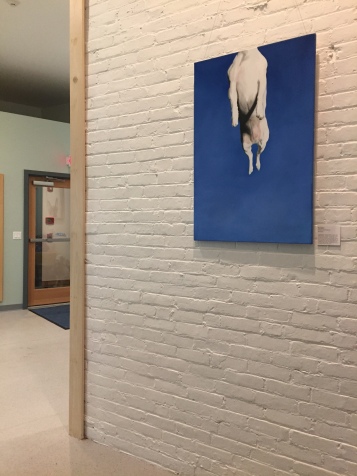 Shortly afterward, they emailed that they would like to buy a painting for their permanent collection.  Great!  They weren’t sure which one, and I was in no rush, so I imagined in my own mind which they may like.  Link, catching the ball, is large and framed, and portrays a dog in a happy and healthful state, joyful anticipation on his face as the ball descends.  The Jack Russell jumping straight out of the canvas is visually simplistic and tends to generate a smile for all that know Jacks.  Hydrocodone is probably the best brushwork…  though I guess a vet’s office may not want to display an overly drugged dog…

They emailed after a while to announce that they had decided, and would like Rupert.  Rupert?  Well, Rupert is my own dog.  It never occurred to me, in the center of my own universe, that they would want to buy my dog.  There were all of those other dogs that surely they would be interested in.  But, sure, OK.

As artists, we approach our subjects from our own place of knowing, and we bring with that all of the joy or baggage that our psyche wants to pack up with it.  After painting so many commissions, I had decided to paint my own dog while he was still alive.  And so, my psyche approached it from that place of sheer intimacy that we have with our dogs.  That all-knowing and unconditional love.  I painted him laying in the studio, his front paws crossed in that “I’m content now” pose, probably wanting to go home or for a walk or to eat, but content to be where I was, together.

And so I brought Rupert when I went to do an initial planning session.  Later, when I

brought the other paintings, I was happy to see that they had hung Rupert on the narrow wall in the waiting area.  Its long shape fits the wall perfectly, and it faces the door as you enter.  We went through the paintings I had brought and agreed on placement, and we hung them in various rooms.

Last week, Rupert died suddenly but peacefully at home.  He was 12 1/2 (when you’re a 12 year old Swissy, that half year is worth mentioning!), but had no obvious health issues and his bloodwork was always on target.  He was just old and slowing down.  As usual, he ate like a viking the night before.  He went outside, pooped, and after inspecting the yard for a while, hopped back up on the porch to come back in.  He settled into his bed and he died.  Couldn’t ask for a better way to go.  It was a Sunday, so I went and got some flowers and sangria, and some friends and I waked him, celebrating his life and laughing over funny stories about him.

We are so used to managing our pets through end-of-life health conditions and planning euthanasia, and it was truly a gift to have a dog die naturally in his own home, in his own bed, on his own terms, and with his own person.  It has had a huge impact on my response to his death; no gloomy sadness, doubts, or regrets.

In life, he was a very happy and — aside from his fear of shiny flooring — a very relaxed, go-with-the-flow kind of guy.  He always came to work with me, whether it was at a dog wash on Broadway in Southie, hiking the woods at the Fells, or walking dogs on the sidewalks of Cambridge and Somerville; but he was always calm and helped the other dogs to be calm.  It was his superpower.  It’s especially meaningful to me now that he watches over the door at the veterinary clinic, in his calm and content posture, reassuring those who enter.

Rupert and several other paintings are hanging with the super staff at Heal Veterinary Clinic, at 150 Belmont St in Watertown.  You won’t find shelves of Science Diet; just some happy faces.

07 Feb This entry was published on February 7, 2018 at 12:36 pm and is filed under dog, musings, oil on canvas. Bookmark the permalink. Follow any comments here with the RSS feed for this post.