The Side Eye (almost finished) 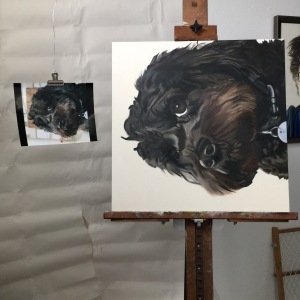 I’ve been avoiding the studio (or, going to the studio but not really accomplishing anything). I have this commission that must be finished tonight so that I can hang it at Christopher’s in the morning, to replace one there that is being delivered to its home in NY. As I’ve written before, the music from Hamilton is my savior in these moments, propelling me along, keeping me moving and focused on the painting in front of me rather than drawn toward my phone to check an email or text or social media.
Back when I worked in a cubicle, I would listen to music all day (I think it was my only way of coping with an environment so counter to my core). I would keep it low so as not to bother my neighbors, but Natalie Merchant, Dead Can Dance, Morrissey, and the Smiths would offer some solace in a world of inboxes and fluorescent lighting. One day, a friend who worked in a cube next to me said something about all that gloomy music I listen to, and I was like “…you think it’s gloomy?” It honestly never occurred to me that it was sad. (Or that she could hear it. I suppose it’s good that I’d lost all of my goth stuff by that point.)

When I was much younger, I was a bookkeeper for a region of stores for a large corporation. (How in the hell I was ever entrusted to balance anyone’s books is beyond me.) I would sit at my desk with my earplugs in (they weren’t buds, yet) and R.E.M. cranked. The earlier stuff. Over and over and over, day after day after day. Sometimes I’d throw in some Church just to shake things up, but old Stipe & co. allowed me to function in such a hollow existence.

There’s a lot that I don’t like about NPR, but there are a few shows that have some pretty good content, and when I heard that Stipe & Bill Berry would be on, I made a mental note. Realizing that this week marks the 25th anniversary of the release of Life’s Rich Pageant made me want to go out and buy some arch supports and denture creme, but this was a good and insightful interview about each song on an album that was all pretty much about death.

And it spawned a blog post (for my canvasmajor site), so I sat and typed this out instead of painting.

Welp, looks like I’ll be back tonight. Hamilton is cued up.

07 Nov This entry was published on November 7, 2017 at 1:39 pm and is filed under Uncategorized. Bookmark the permalink. Follow any comments here with the RSS feed for this post.

Older: The Side Eye, on the Easel
Newer: Home at Last