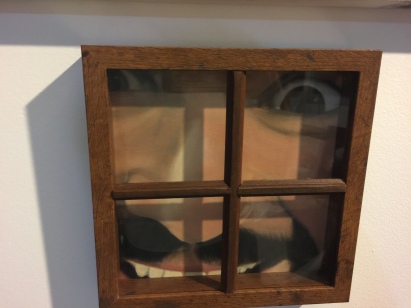 When I received the email inviting me to participate in a show at Blue Mountain Gallery in NYC, I was a little perplexed.  I work almost exclusively on canvases sized 36″ and up, and here was an invitation to a small works show with a maximum size of 12 x 12 inches.  To be perfectly honest, I would have dismissed it immediately if it wasn’t in Chelsea.

I had been thinking about doing some large, close-up faces on old wooden window frames, appearing as giants peering into the room, but was still working out the logistics.  I thought a smaller prototype of this concept may be a fun idea for this show, but I wasn’t sure how to find a window a foot wide or smaller.  So, I made one using a shadow box, a hardwood panel, a saw, a dremel, and some stain.

I still needed the face, though, and was asking visitors during Somerville Open Studios to submit their best shot, when a friend came bounding in to my studio with a postcard made by a friend of a friend of his face —  a super close-up of a wide-eyed, creepy, mustachioed smile —  which he plastered all over his friend’s house while he was out of town.  Man humor.  It was perfect, and I was grateful to her for thinking of me and my project.

And so, my little window face was started.  The title “Knock Knock” refers not only to the obvious, but to the dichotomy that.often exists in the interpretation of many (most?) of my human faces. The joking face becomes a creepy one, the expression of fun becomes one of shock, of fear; and children are drawn to paintings which repel adults. Which is it? That depends on the viewer; which serves as a reminder that there exists in us all a range from lightness to darkness which goes so much deeper than mere lighting and shading

It’s now hanging in the Invitational Small Works show at Blue Mountain Gallery on West 25th Street in New York, through July 29th.  Delivering it, I had the opportunity to see the other work being exhibited and I am thrilled to have it hanging among such quality.

13 Jul This entry was published on July 13, 2017 at 12:15 pm and is filed under Uncategorized. Bookmark the permalink. Follow any comments here with the RSS feed for this post.

Older: What Exactly Do I Do?
Newer: Clay and the Swissy Snooze