I had the good fortune of attending a day of panel discussions and breakout sessions for artists at The Art of Protest: Public Art and Scholarship as Political Resistance at the Mayapple Center for Arts & Humanities at Sarah Lawrence College in Bronxville, NY.  The day included visual arts, poetry, filmmaking, writing, and music, from a diverse panel covering a number of topics in confronting injustice through our art.  In the afternoon, I joined the visual arts workshop led by David Birkin.  I was inspired not only by his projects, but by the panel discussions with all of the participating artists both before and after the workshops, and my mind was frothing with the need to speak more truth in the art that I produce.  But how?  The barrage of assaults on justice happening daily in the U.S. are overwhelming.

I had packed a bag to include an extra night of wandering if the desire struck, and so I headed north toward North Adams, MA, instead of eastward toward home.  I figured that, as long as I’m so far west of home, I may as well visit the newly opened Museum of Dog.  I wasn’t sure of the juxtaposition — leaving such intense subject matter and the drive for truth to head for dog nostalgia and folk art?  But drive I did, with no radio, no news, no social media, not even a podcast, in the hopes that my mind could process my day during the few hours or more that I would take meandering up rural routes.  What is the truth that I want to try to represent, and how would that look? 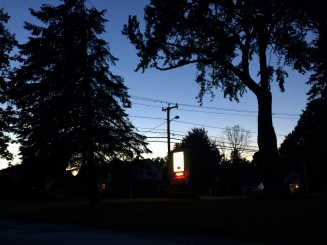 As I drove along winding roads passing motor lodges, diners, and pointy white steeples jutting upward from the valleys of trees, I enjoyed the occasional aromas of hay fields in the sun and wood-burning stoves. It occurred to me that the more I try to confront the sociopolitical reality of the country that I live in now, the more I recoil into the comfortable, the past, the notion that peace and harmony surrounds me.  Eventually, I pulled in to a motor inn nestled in the pines, interrupted the very nice couple having supper, and I got my key –  the old, clunky kind, attached to a big plastic key ring with the room number etched in big numbers  –  and settled in with my notebook and a book.  Will my brain be more focused in the morning, after a quiet slumber? 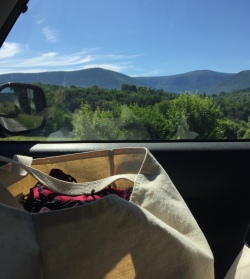 I got up and headed out to a diner, where I sat at the counter with my coffee and eggs and ingested the arts section of the local paper (interesting interview with Zachary Wood about the need to listen to opposing viewpoints).  Then onward my disheveled dogmobile wound, up mountains and around turns, past campgrounds and closed antiques shops, and we rolled into North Adams and turned in to Mass MoCA.

I began wandering through the buildings and looking up at artwork that really doesn’t speak to me much, moving quickly along with rolling eyes and muttering breath; but soon walked into Jenny Holzer’s exhibit of autopsy reports from Abu Ghraib and GTMO, correspondence and memos from ICE on what constitutes acceptable torture, handprints of detainees (most of whom were innocent, of course), and finally stopped to appreciate the enormity, the breadth, the scope; to read report after report, memo after memo, story after story, letter after letter.  While it was a tough exhibit to really take in, I was grateful not only that it is there, blown up on so many walls for all to read, but that it brought me back to yesterday.  Not the yesterday of campfires and diners, but yesterday’s panel discussions on the need for voice and truth.  In my fear that it would dissipate into the smoke billowing up from chimneys or tree lines falling off into valleys, I instead saw it weaving in.

Then I went to the Museum of Dog, stopped for ice cream, browsed the shelves of a little book store, and headed home in silence, in the hopes that it would all coalesce into a more meaningful understanding and a more inspired way to express it.

18 Jun This entry was published on June 18, 2018 at 9:23 pm and is filed under musings. Bookmark the permalink. Follow any comments here with the RSS feed for this post.